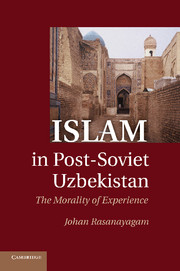 Islam in Post-Soviet Uzbekistan
The Morality of Experience