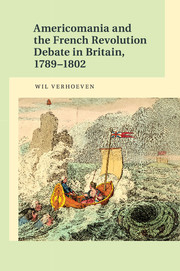 Americomania and the French Revolution Debate in Britain, 1789–1802