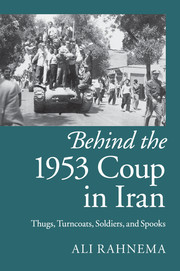 Behind the 1953 Coup in Iran
Thugs, Turncoats, Soldiers, and Spooks