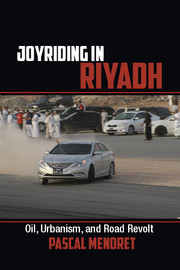 An Interview with Pascal Menoret, author of 'Joyriding in Riyadh'