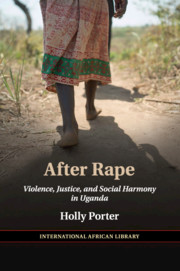 After Rape
Violence, Justice, and Social Harmony in Uganda