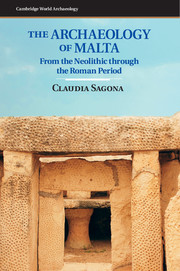 The Archaeology of Malta
From the Neolithic through the Roman Period