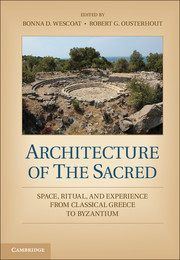 Architecture of the Sacred
Space, Ritual, and Experience from Classical Greece to Byzantium