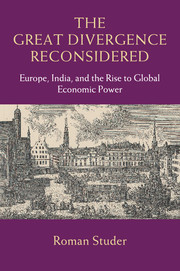 The Great Divergence Reconsidered
Europe, India, and the Rise to Global Economic Power