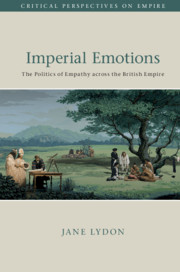 Imperial Emotions
The Politics of Empathy across the British Empire