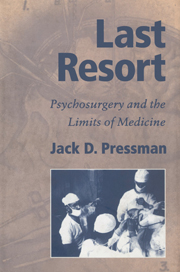 Last Resort
Psychosurgery and the Limits of Medicine