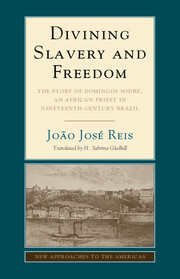 Divining Slavery and Freedom
The Story of Domingos Sodré, an African Priest in Nineteenth-Century Brazil