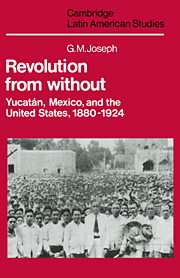 Revolution from Without
Yucatán, Mexico, and the United States, 1880–1924