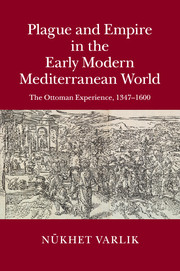 Plague and Empire in the Early Modern Mediterranean World
The Ottoman Experience, 1347–1600