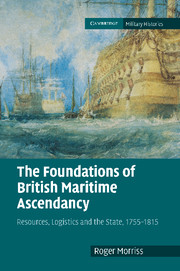 The Foundations of British Maritime Ascendancy
Resources, Logistics and the State, 1755–1815