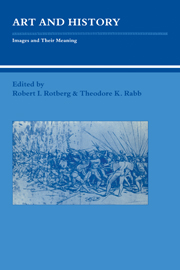 Art and History
Images and their Meaning

Part of Studies in Interdisciplinary History