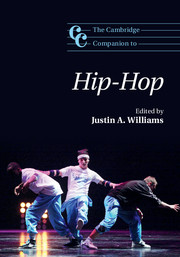 The Cambridge Companion to Hip-Hop

Part of Cambridge Companions to Music