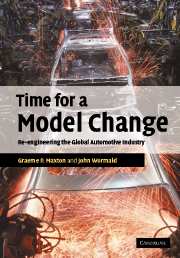 Time for a Model Change
Re-engineering the Global Automotive Industry