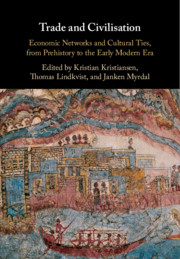 Trade and Civilisation
Economic Networks and Cultural Ties, from Prehistory to the Early Modern Era