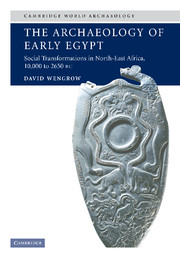 The Archaeology of Early Egypt
Social Transformations in North-East Africa, c.10,000 to 2,650 BC