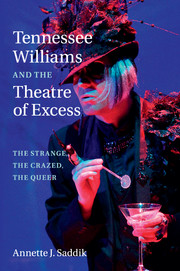 Tennessee Williams and the Theatre of Excess
The Strange, the Crazed, the Queer