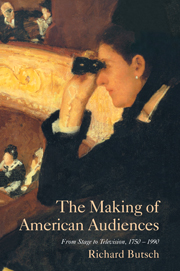 The Making of American Audiences
From Stage to Television, 1750–1990