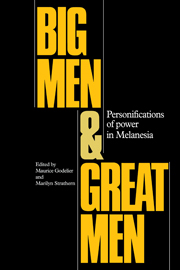 Big Men and Great Men
Personifications of Power in Melanesia