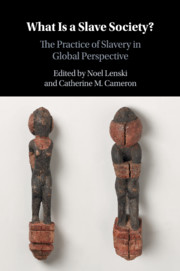 What Is a Slave Society?
The Practice of Slavery in Global Perspective