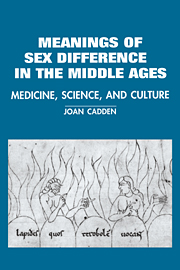 The Meanings of Sex Difference in the Middle Ages
Medicine, Science, and Culture