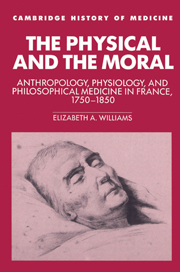 The Physical and the Moral
Anthropology, Physiology, and Philosophical Medicine in France, 1750–1850