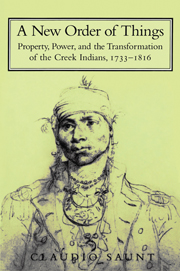 A New Order of Things
Property, Power, and the Transformation of the Creek Indians, 1733–1816