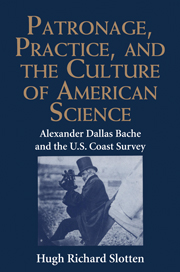 Patronage, Practice, and the Culture of American Science
Alexander Dallas Bache and the U. S. Coast Survey