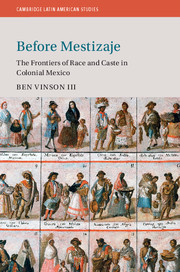 Before Mestizaje
The Frontiers of Race and Caste in Colonial Mexico