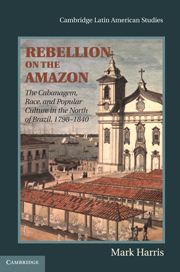 Rebellion on the Amazon
The Cabanagem, Race, and Popular Culture in the North of Brazil, 1798–1840