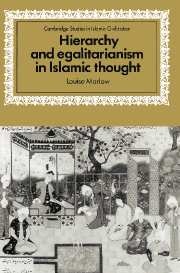 Hierarchy and Egalitarianism in Islamic Thought