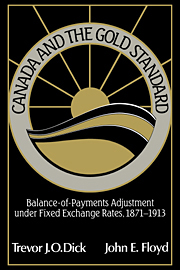 Canada and the Gold Standard
Balance of Payments Adjustment under Fixed Exchange Rates, 1871–1913