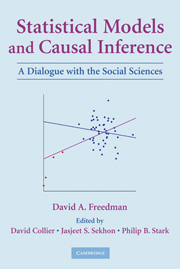 Statistical Models and Causal Inference
A Dialogue with the Social Sciences