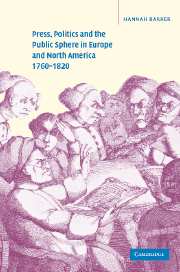 Press, Politics and the Public Sphere in Europe and North America, 1760–1820