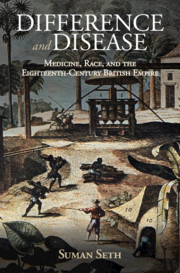 Difference and Disease
Medicine, Race, and the Eighteenth-Century British Empire