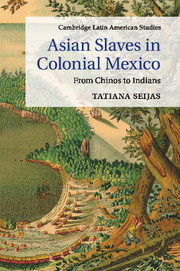 Asian Slaves in Colonial Mexico
From Chinos to Indians