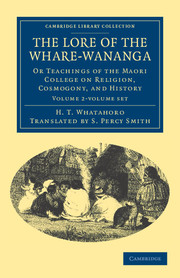 The Lore of the Whare-wānanga
Or Teachings of the Maori College on Religion, Cosmogony, and History
2 Volume Set