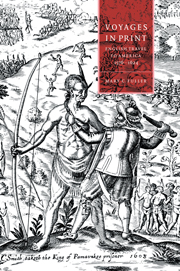 Voyages in Print
English Narratives of Travel to America 1576–1624