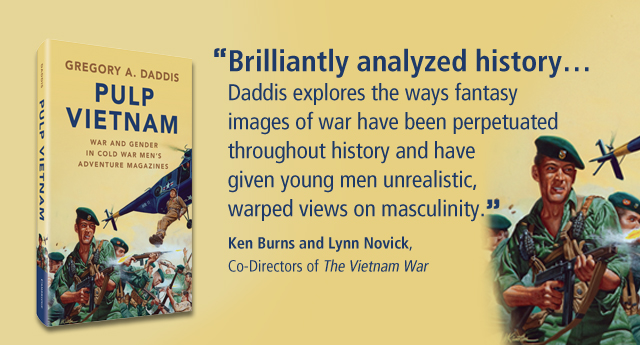 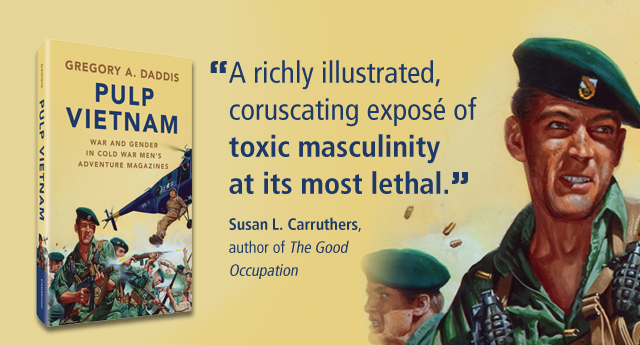 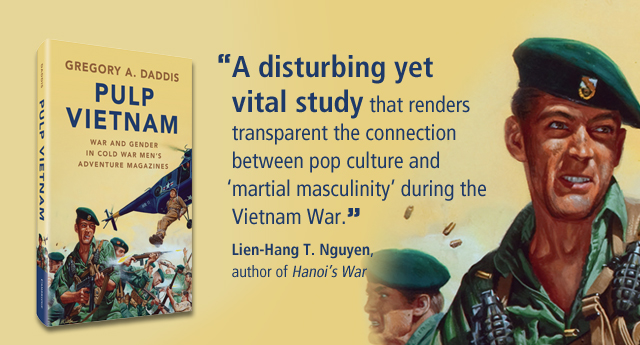 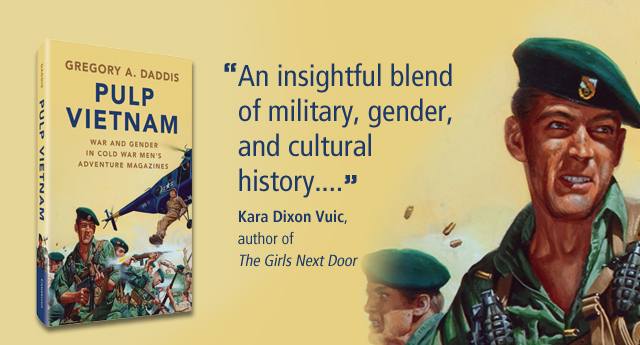 In this compelling evaluation of Cold War popular culture, Pulp Vietnam explores how men's adventure magazines helped shape the attitudes of young, working-class Americans, the same men who fought and served in the long and bitter war in Vietnam. The “macho pulps” - boasting titles like Man's Conquest, Battle Cry, and Adventure Life - portrayed men courageously defeating their enemies in battle, while women were reduced to sexual objects, either trivialized as erotic trophies or depicted as sexualized villains using their bodies to prey on unsuspecting, innocent men. The result was the crafting and dissemination of a particular version of martial masculinity that helped establish GIs' expectations and perceptions of war in Vietnam. By examining the role that popular culture can play in normalizing wartime sexual violence and challenging readers to consider how American society should move beyond pulp conceptions of “normal” male behavior, Daddis convincingly argues that how we construct popular tales of masculinity matters in both peace and war.

Gregory A. Daddis is a professor of history and the USS Midway Chair in Modern US Military History at San Diego State University. A retired US Army colonel, he has served in both Operations Desert Storm and Iraqi Freedom. He has authored four books, including Withdrawal: Reassessing America's Final Years in Vietnam (2017).

'This brilliantly analyzed history dismantles masculine archetypes portrayed by media during the Vietnam War. Daddis explores the ways fantasy images of war have been perpetuated throughout history and have given young men unrealistic, warped views on masculinity.' Ken Burns and Lynn Novick, Co-Directors of The Vietnam War

'Hitherto overlooked among 'the things they carried' in Vietnam were thousands of pulp magazines. Daddis scrupulously dissects the delusions of supremacy - sexual, racial, and martial - comic books fueled, with disastrous results for both American soldiers and Vietnamese civilians. A richly illustrated, coruscating exposé of toxic masculinity at its most lethal.' Susan L. Carruthers, author of The Good Occupation: American Soldiers and the Hazards of Peace

'A disturbing yet vital study that renders transparent the connection between pop culture and ‘martial masculinity’ during the Vietnam War. American GIs were woefully misled by these ‘macho pulps’ that helped plant toxic ideals of manhood, and the Vietnamese (friend or foe, and particularly women) would pay for this dangerous melding of war and sex.' Lien-Hang T. Nguyen, author of Hanoi’s War: An International History of the War for Peace in Vietnam

'In Pulp Vietnam, Gregory A. Daddis brilliantly explores the strange, gaudy, and wildly misleading cultural baggage innumerable American soldiers carried through the jungles and rice paddies of the Vietnam War.  Steeped in the imagery of pulp magazines during the 1950s and early 1960s, thousands of young men were encouraged to conflate hypermasculine heroism with the prospect of sexual conquest and sexual reward. In clear, measured, meticulously composed sentences, Daddis levers open a new and important window on the American war in Vietnam, a window through which the reader may glimpse the psychological origins of debacle, disappointment, betrayed expectations, cartoonish fantasies, wartime travesties, and postwar nightmares.' Tim O’Brien, author of The Things They Carried

'In Cold War men’s adventure magazines, all the men were brawny, virile, and victorious, and all the women were beautiful, buxom, and willing. In an insightful blend of military, gender, and cultural history, Pulp Vietnam reveals the dangerous ways these fantasies collided in a war that failed to measure up to GIs’ expectations.' Kara Dixon Vuic, author of The Girls Next Door: Bringing the Home Front to the Front Lines