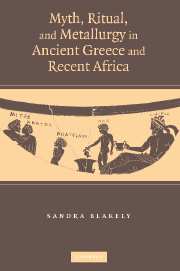 Myth, Ritual and Metallurgy in Ancient Greece and Recent Africa