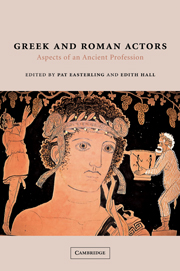 Greek and Roman Actors
Aspects of an Ancient Profession