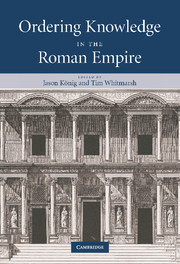 Ordering Knowledge in the Roman Empire