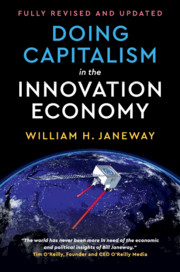 Doing Capitalism in the Innovation Economy
Reconfiguring the Three-Player Game between Markets, Speculators and the State