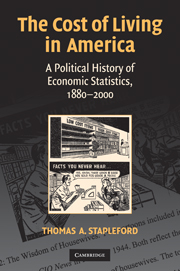 The Cost of Living in America
A Political History of Economic Statistics, 1880–2000