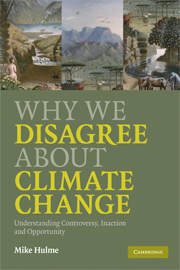 Why We Disagree about Climate Change
Understanding Controversy, Inaction and Opportunity