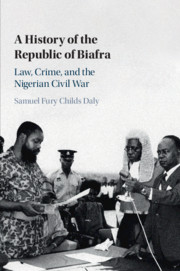 A History of the Republic of Biafra
Law, Crime, and the Nigerian Civil War