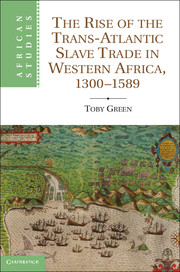 The Rise of the Trans-Atlantic Slave Trade in Western Africa, 1300–1589