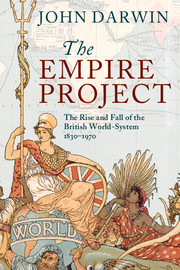 The Empire Project
The Rise and Fall of the British World-System, 1830–1970