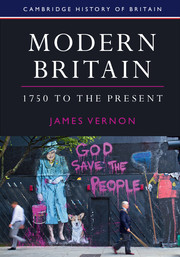 Modern Britain, 1750 to the Present

Part of Cambridge History of Britain