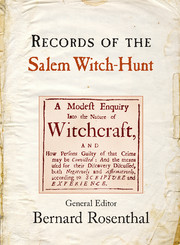 Records of the Salem Witch-Hunt