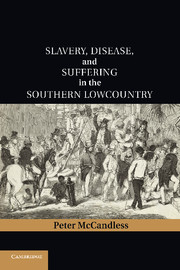 Slavery, Disease, and Suffering in the Southern Lowcountry